… Says Synergy Among Players in the Sector, Critical to Food Security

For Nigeria to attain food security and optimal growth of her agro-industry, there is need for an active synergy among stakeholders in the entire agricultural value chain.

This was the position of Oyo State farmers at the 2020 edition of the All Agribusiness Stakeholders Summit which held on Thursday in Ibadan. 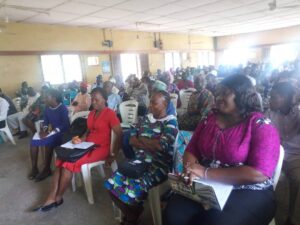 Its theme, “Building a Synergy Among Players in the Agric Industry for Growth and Food Security in Nigeria”, beamed the searchlight on the peculiarities of partnership in the agric space.

Speaking at the event, convener of the summit, Alhaji Salihu Imam said in his welcome address that Nigerian farmers are keen on building and forging partnerships to ensure that the country achieves her target on food sufficiency.

“We are building synergy among all stakeholders, to create sustainable food security in our state and country,” were his actual words.

Imam who doubles as the state chairman of both ADFA and NACOFTAN, assured that the takeaways from the summit would be compiled as a working document for the agric industry.

He, however, urged stakeholders to work together to ensure that the sector thrives, even as those at the event would be grouped to fast-track the intended goal.

Chairman of the occasion and Director of Research, National Horticultural Research Institute (NIHORT), Dr Olajide Taiwo also stressed that synergy was as necessary to the sector as social capital, if the progress and desired results were to be achieved.

Taiwo harped on the importance of youths in nation-building, while also giving kudos to the youths who were part of the summit.

He urged that the summit be held continuously, while beckoning on the participants to be active progressive partners in the quest for food security.

The director further acknowledged the relevance of the theme, as it relates to the country’s development.

On his part, chairman of ACCOS, Hon. Afeez Adelowo stated that the state government was putting all necessary mechanisms in place, to ensure sufficient food production and also make agriculture profitable.

The ACCOS chairman acknowledged that “very soon, we will all have reasons to see Oyo state as a state with reference to agriculture”.

Adelowo also urged stakeholders to synergize and support the government in achieving its goals.

The summit had presentations from research institutes, federal and state governments agencies in the agricultural sector and private organisations.