In its usual manner of rewarding partners, Golden Fertilizer organized its annual
customer Forum to celebrate and award customers who have contributed immensely
towards the success of its business.

The event which was themed “Going the Distance… Emerging Stronger,” was inspired
by the relentless spirit of Golden Fertilizer’s key partners, who despite the challenges
posed by the outbreak of COVID-19 and its effect on the foods and Agro-allied sector
remained resilient.

The event which took place at Eko Hotel & Suites on the 26th of November had in
attendance Mr. Paul Gbededo, the Group Managing Director of FMN, Mr. Boye
Olusanya, Group Chief operating officer, Engr. Olusegun Falade, the Head Golden Agri
Inputs (GAIL) and other top performing customers across all the regions in the country.

Speaking at the event, Paul Gbededo recognized and appreciated the pioneer
employees and partners of Golden Fertilizer. He emphasized that they had contributed
immeasurably to build the brand and the network that Golden fertilizer enjoys today.
He also mentioned that since its establishment, the company had carved a niche in the
market that is unmatched and remains unrivalled by any other fertilizer brands in
Nigeria. This is due to the production of quality, consistent and affordable products,
strong partnerships and exceptional customer service. 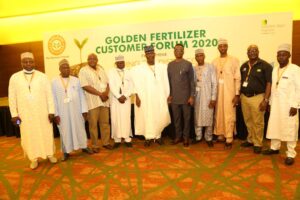 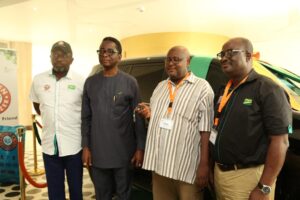 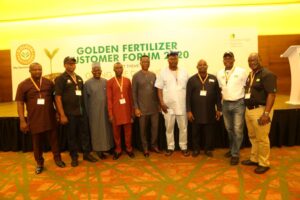 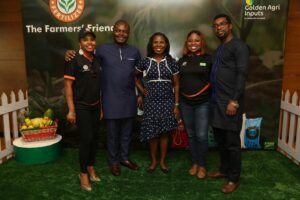 Speaking further, the GMD stressed the need to optimize Golden fertilizer’s businesses
model of innovation and to position the business properly to tackle future challenges.
“Our company has not relented. We are looking forward to expansion of our blending
plants into more states outside Lagos.” he added.

Golden Fertilizer Company Limited was established as a wholly owned subsidiary of
Flour Mills of Nigeria Plc (FMN) in 1997 and is one of the leading fertilizer blending
and distribution company in the country. With a current capacity of 450,000MTPA,
blending facility in Lagos & Kaduna and a wide distribution network, Golden
Fertilizer has continued to flourish in Nigeria as the farmers’ friend providing an array
of blended NPK variants, special blends as required by individuals or corporate
customers and an effective distribution network. They are also participating in the
Federal Government’s Presidential fertilizer initiative, which provides fertilizers to
farmers at a subsidized rate.