The expanse of land is located at the Dudduru Grazing Reserve in Ajingi Local Government Area (LGA) of the State.

Fodder crops are imperative to the development of Nigeria’s livestock industry as they serve as feed for a wide range of Nigerian cattle and small ruminant animals that provide a bulk of animal protein especially milk and meat consumed in the country.

The handover comes after KSADP first awarded a contract worth N88, 049, 970 million to NAPRI in September 2020 to establish start a 20-hectare seed multiplication scheme.

The development, according to the Project, is expected to form the cornerstone of large-scale commercial fodder production in the state.

In his remarks during the handing over formalities, the State Project Coordinator, Malam Ibrahim Garba Muhammad explained that the activity will pave way for the production of thousands of tons of fodder that will support thousands of livestock units and many pastoral families across the state all year round. 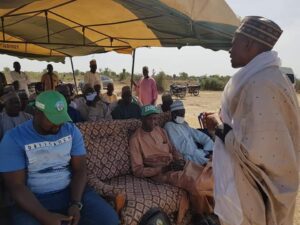 Muhammad further said that the cultivated fodder seeds would also be planted at Dansoshiya Forest in Kiru LGA to provide about 4, 000 hectares of the pasture so as to minimize the seasonal movement of pastoral families from Kano to other parts of the country in search of animal feed and water.

“The project will support those of you residing here at Dudduru to engage in small-scale fodder production around your homesteads so that you can feed your cattle and sell to prospective livestock keepers for more income,” he added.

The Project Coordinator also assured the pastoralists who settle in the grazing reserve that their homesteads and stock routes would not be affected by the seed multiplication venture.

He, therefore, sought for their (the pastoralists) cooperation and support to see to the success of the project.

The post Kano Hands Over Land to ABU to Expand Fodder Production appeared first on AgroNigeria.