The South West wing of the Poultry Association of Nigeria (PAN) has called on the government to intervene in the ‘lingering grain crisis,’ stating that the incessant increase in the cost of grains is laying siege on the poultry sector.

PAN which decried the acute scarcity of maize and soya bean, said that the poultry industry, worth billions of Naira, may suffer a drastic collapse if the government does not salvage the situation.

The group made this called at a press conference themed “Imminent Collapse of Poultry Industry: Over 5 Million Jobs Threatened – Save Our Soul”, which was held on Tuesday at the NUJ Conference Hall, Ibadan, Oyo State. 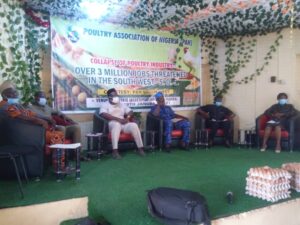 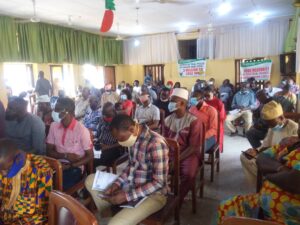 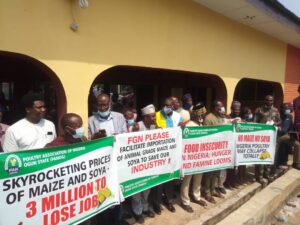 According to him, the sector is worth over N2 Trillion in investment and has the leeway to create over 10 million jobs, directly and indirectly.

In the South West region, the chairman revealed that the poultry industry in more than six decades has been growing consistently to a population of 30million, with 60 percent representing the national poultry population.

Adetoyi, however, lamented that the sector was on the verge of submerging due to the incessant rise in the price of feeds, which has largely affected the production capacity of poultry farmers, particularly in the region.

He said, “Due to insufficient supply of maize against the huge demand by the poultry sector and other users, in about July 2020, the price rose from N105,000 to N165,000. The price further rose to as high as N185,000 per ton, when a ban on forex for the importation of maize was announced by the CBN, amid the initial hike in price.

“The concession to import 262,000MT was given to some poultry stakeholders, after much public outcry by poultry farmers. This had long been done. In the onset of harvest, which was November 2020, it was obvious that our local production is grossly inadequate to support the poultry industry through 2021”.

Adetoyi further added that the inadequate rainfall, insecurity and herdsmen challenges, illegal export activities, and the high demand for maize in the poultry sector, due to the Broiler Anchor Borrowers’ Programme (ABP) of the government, had drastic effects on the sector.

“In December, most farmers from small to large were unable to sell their broiler because the cost of production was even higher than what an average Nigerian can afford.

“Presently, egg is going out of the reach of an average family with ideal price at N1300 per crate, but the farm gate price is N1000 to N1100, a price that will force farmers to close down,” Adetoyi explained.

PAN, however, prayed the government to approve the urgent importation of animal feed grade of maize, to sustain 50 million layers, 100 million broilers, one million breeders and other classes of poultry, until the next season.

It also called on the government to enforce a ban on the export of Soya, both seed and the processed meal, while urging it to prioritise the cultivation of maize across the country.

The various State Chairmen of PAN present at the conference urged the Federal Government to extend the all-year-round irrigation systems to the Southwest and also add eggs to the School Feeding Program.

They also urged the South West Governors to fast-track irrigation across all value chains, even as the effect of climate change continues to derail agricultural activity.