The Federal Government has said that it will soon commence the ‘livestock pilot scheme programme’ in selected states of the federation to transform the livestock sector and amass more revenue for the economy.

Minister of Agriculture, Alhaji Sabo Nanono who disclosed this on Monday noted that it was high time the country exploited the livestock sector, describing it as a national asset worth over N33 trillion.

This was contained in a release made available to AgroNigeria by the Federal Ministry of Agriculture and Rural Development (FMARD) and signed by the ministry’s Chief Information Officer, Ezeaja Ikemefuna.

Speaking in Lafia, Nasarawa State, during a visit to Governor Abdullahi Sule, the minister said that the livestock programme in the state was worth over 400,000 euros, and is set to pilot the scheme.

Alongside Gombe and Bauchi states, Nasawara was also tagged as one of the key states to fast-track the livestock programme.

Nanono who underscored the relevance of the agriculture sector to the nation’s economy, also stressed that the industrial sector was paramount in driving agriculture as a business.

According to him, agricultural mechanisation is a key driver towards ensuring that the country attains self-sufficiency in food production as well as fostering job creation.

“The agriculture sector is the answer for us to feed ourselves, feed our neighbours and boost Internally Generated Revenue.

“There should be vertical and horizontal value chain, because it will take the teeming Nigerian youths out of the streets and also harness agro-processing back into the mainstream of our economy,” he said.

Meanwhile, the minister has said that the Agriculture Mechanisation Programme would kick-start as soon as possible in the projected 632 Local Government Areas of the country, pending the approval of the National Assembly.

The programme is expected to involve a full technology package transfer that would cover all stages, from agricultural production to industrial processing and down to marketing.

Expressing gratitude to the government for the scheme, Governor Sule said that it was in line with the economic diversification policy of the President Muhammadu Buhari-led administration.

Nasarawa, he said, was also at the forefront of agricultural development and will continue to create an enabling environment for investors in the state.

He said his administration will harness the potentials in the agriculture sector to create jobs and boost the economic growth of the state.

The release also revealed that Nanono paid visits to the Lafia Rice mill in Kilema as well as the JICA Rice Incubation Plant and the Fertilizer Blending Plant in the state’s capital. 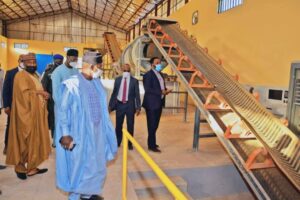 Nanono used the opportunity to restate the government’s will to increase rice production in order to achieve self-sufficiency and drive exportation.

The post FG to Kick Off Livestock Pilot Scheme in Nasarawa, Others appeared first on AgroNigeria.