In what was a strategic event to develop the shea industry in Oyo State, stakeholders have underscored the benefits of the produce to the economic growth of the state and the country at large.

This was emphasised at the Inaugural Stakeholder Session 2021 organised by the implementing partners of the Kolo Nafaso project, which held on Thursday at the Bon Hotel Nest, in Ibadan, Oyo State.

The session with the theme “Developing the Shea Sector in Oyo state” shed light on the need to grow the shea industry in order create jobs and alleviate poverty in the state.

In her opening remarks, Executive Director of SEF, Mrs Mobola Sagoe, informed that the Foundation organised training and empowerments for women in the sub-sector, across Oyo state, to build their capacity. 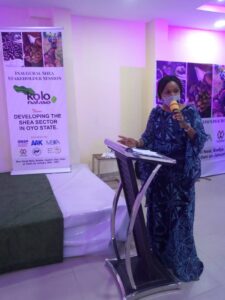 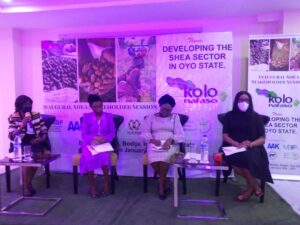 The ED, echoing the Foundation’s drive, informed stakeholders that the Kolo Nafaso project, which empowers women, was focusing on backward integration of the shea sub-sector.

According to the SEF management team, the project will be empowering 30,000 women, directly and indirectly in the shea industry.

It added that beneficiaries will be trained to enable them produce high-quality products that will give them asses to guaranteed international markets, asses to trade finance, savings and loans to improve their livelihoods.

On her part, the Country Project Manager of Mennonite Economic Development Association (MEDA), Mrs Fosen Grace Okelola, added that as an administrator and facilitator of processes, MEDA was doing so in other countries including Nigeria.

At the event, two-panel sessions were held, tagged: “Shea Tree Protection: The Role of LGAS And Local Communities in Oyo state”, and “Building the Capacity of Women Shea Collectors for Global Competitiveness: Challenges and Opportunities”.

Project Coordinator for Rural Asses and Agricultural Marketing Project (RAAMP), Dr Yode Ayanlowo also delivered a presentation on the socioeconomic value of the direct sourcing model for shea in Nigeria.

A video on Kolo Nafaso’s project of empowering women in shea, in Ghana, was played to the viewing of stakeholders and narrated by Ms Ifeoluwa Dosunmu, Kolo Nafaso Deputy Program Manager, AAK Nigeria.

Present at the event were the implementing partners, top government officials (federal and state), royal fathers, women involved in shea, other stakeholders and the media. 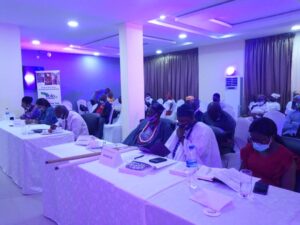