The Kano State Agro Pastoral Development Project (KSADP) said it has awarded an N83 million worth contract for the supply of 8,250 vials of Contagious Bovine Pleuropneumonia (CBPP) and 20,000 vials of Peste des Petits Ruminants (PPR) vaccines.

CBPP is a contagious bacterial disease that affects the lungs of cattle while PPR is an animal disease (highly infectious) that fights domestic and wild small ruminants.

The vaccine contract, according to KSADP, was awarded to IBM Investment Ltd and covers the purchase of 70 packs of various inputs and training of inoculators. 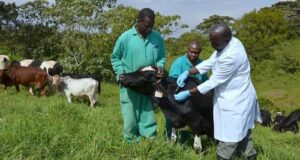 Vaccination of animals plays a pivotal role in optimising their capacity to resist disease, maintain welfare and boost the productivity of large and small ruminants.

KSADP underscored that for the past three years, animal vaccination has not been conducted in Kano State for various reasons.

Many pastoral communities in the state have suffered a huge loss of animals as a result of the long absence of vaccination, the Project noted.

State Project Coordinator, Malam Ibrahim Garba Muhammed who signed the contract on behalf of his agency explained that the move was to prevent thousands of pastoral families in the state from losing their source of livelihoods.

This, according to Muhammed, will also boost food security and create employment opportunities for the teeming population.

He said, “We are going to work with the state Ministry of Agriculture to kick start an annual vaccination programme in Kano, because it is evident that deadly cattle and small ruminants’ diseases affect the already vulnerable rural communities by decimating their income, decreasing employment opportunities, and forcing them to migrate in the face of very high risk”.

The statewide vaccination programme would commence in the next few weeks and expected to treat over eight hundred thousand cattle and one million small ruminants per annum across the local governments, he added.

Muhammed further noted that the state governor, Dr. Abdullahi Umar Ganduje, would personally oversee the flag-off of the exercise.