The Lagos State Government has projected a total investment plan worth about $10 billion in the state’s agro-industry, within the next five years.

The investment will be received from the state government, private sector, donor agencies and development partners.

State Governor, Mr Babajide Sanwo-Olu made this known on Thursday during the official flag-off of the five-year Agricultural and Food Systems Roadmap in Lagos. 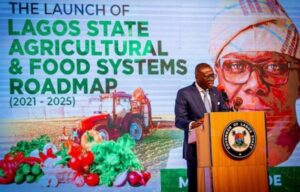 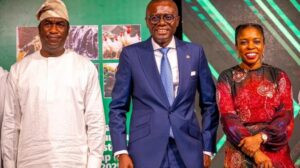 Sanwo-Olu noted that a bulk of the investments were expected to be private sector-driven while the government will provide the needed infrastructure.

The governor said that the focus of the five-year roadmap was to develop the agricultural value chain where the state has competitive and comparative advantages.

” It will help to enhance the state’s self-sufficiency in food production from 18 percent to 40 percent and achieve the Sustainable Development Goals in Lagos State.

” The roadmap is, therefore, the most appropriate tool needed to unleash the capacity to produce the most-consumed agricultural products in the state and to accelerate the establishment of farms and agri-businesses,” he added.

Speaking on the modalities, Sanwo-Olu explained that the roadmap will essentially focus on the growth of the upstream, midstream and downstream sectors, as well as improvement of the private sector participation in the agriculture sector.

In his words,” Our strategies for sustainable agricultural development shall focus on three pillars which include growing the upstream sector through interventions by leveraging technologies that are capable of lowering the cost of production of farming with the support from donor agencies.

”We will also focus on growing the midstream and downstream sectors which involves processing, handling, storage, cold chain, packaging, utilisation and commercialisation.

” Thirdly, the Government will help the private sector with business-friendly credits,” Governor divulged

Sanwo-Olu, therefore, assured that the roadmap would also lead to wealth generation, value creation, food security, industrialisation of the agricultural sector and the entrenchment of inclusive socio-economic development of the state.

Kaduna to Train 25,000 Youths on Agriculture in 5years