Aside from the huge export value attached to cocoa in the world market which improves the economic condition of the producing countries including Nigeria, Ghana, and Côte d’Ivoire, one of the major concerns of the consumers and manufacturers of cocoa-based products like chocolate is the involvement of child labour.

It is estimated that over 1.56 million children were involved in cocoa-related child labour in Côte d’Ivoire and Ghana in 2018-2019. In 2019, Nigeria also made a minimal advancement in efforts to eliminate the worst form of child labour according to Bureau of International Labour Affairs in the USA. According to research work in the University of Osun, Osun State, educational challenges facing children in cocoa plantation reveals that their academic performances are not worthwhile when compared with what obtains in an urban area.

For these reasons, a cocoa sustainability company SUCDEN-Olakoko has embarked on a back-to-school project that will enlighten the farmers on child labour and encourage their children to focus more on education. As part of activities marking the annual farmers’ day organized for cocoa farmers, the organization coordinated a 4-State based Quiz competition for the cocoa farmers’ children in Osun, Ondo, Ogun, and Edo State.

In a press release by the Project Manager of the company, Mrs. Mopelola Fabunmi indicated that “SUCDEN-Olakoko Project is not only focusing on improving cocoa productivity but is also interested in the total wellbeing of our farmers and families as well as being committed to assist the farmers to eradicate or reduce to the barest minimum the issue of child labour in our great country, Nigeria.

She added that “we try in our own little way to ensure the achievement of the Sustainable Development Goals (SDGs) which was adopted by Nigeria in 2015. We have been able to contribute our little quota in supporting the communities we are working with through improving health care awareness, women empowerment, and education (Back-to-School), by achieving universal basic education and ensuring inclusive and equitable quality education and promote lifelong learning opportunity for all.

At the end of the quiz finale competition on the 3rd of June 2021 after the regionals, Ajayi Opeyemi of Adventist High School Ayetoro Osogbo Osun State came first in the senior category, while Akinsola Oluwatosin of Community Grammar School Onirogbo in Ondo State emerged the second runner just as Onuh Michael of Honey Land College Olode in Osun State won the third position.

In his own remark at the event, a cocoa farmer and Procurement Manager of Olakoko Project, Mr. Bankole Ojo expressed concern over the high cost of labour, deplorable condition of farms roads and enjoined the government to invest massively on rural roads to boost the production of cocoa and ensure food security. He also urged the Federal Government to subsidize farm inputs in view of the current economic challenges in the country and ensure there are mechanisms in place for over 65% of rural farmers to benefit from such scheme.

The organization also used the avenue to award gift items to the best lead farmers, buyers, and females farmers across Osun, Ondo, Edo and Ogun States. 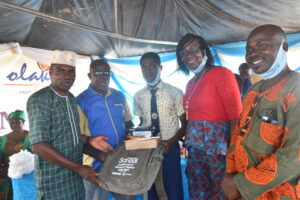