Nigeria has the capacity to overtake Ivoire, Ghana and Indonesia to become the largest cocoa producer in the world, Minister of Agriculture and Rural Development, Alhaji Muhammed Sabo Nanono has said.

Nanono made this assertion in Akure, Ondo State while formally opening the newly established National Secretariat of the Cocoa Farmers Association of Nigeria (CFAN) on Monday.

The minister who drew from history, noted that over the past three decades, cocoa alone has contributed an average of 313 million US dollars to Nigeria’s Gross Domestic Product (GDP).

According to him, Nigeria was once a major producer of cocoa but today lags behind Cote d’ Ivoire, Ghana and Indonesia sharing only 6 percent of global production of the commodity.

Nanono attributed the decline in production to bad weather, old trees that have not been rehabilitated, lack of improved seedlings, poor quality due to pest infestation and pesticide contamination, among others.

The minister however reiterated the commitment of President Muhammadu Buhari’s administration to the development of all sectors of the economy, especially agriculture.

Cocoa production is on the front burner of the government despite the economic downturn the world has been experiencing due to the COVID-19 pandemic, Nanono said. 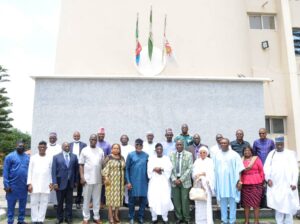 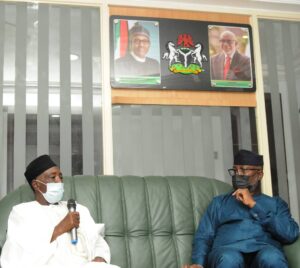 In a press release signed by his Technical Adviser (Media), Ahmed Aminu, the minister disclosed that his ministry will henceforth ensure the availability of cocoa seedlings and pods to farmers to ensure food security.

Nanono pointed that his ministry has so far distributed over 300,000 improved hybrid cocoa seedlings in the South-West, South-South, North- Central and South- Eastern parts of the country coupled with herbicides, pesticides and solo pumps to jerk up cocoa production from the present level of 25,000 metric tons to 350,000 metric tonnes per annum.

Describing the hybrid seedlings being provided to cocoa farmers, the minister explained that they have the capacity of fruiting in two-and-a-half to three years.

Nanono also lauded the leadership of the CFAN for their focused vision in erecting the magnificent National Secretariat Complex in Akure which is the largest producer of the commodity in the country.

We are looking forward to the support of @SyngentaFDN , @akin_adesina @FmardNg @Ogirinye To spark Agricultural seed revolution in Nigeria through these young seed entrepreneurs.
View on Twitter
0
0
Seed & Mech Hubs @Seedmechhubs