The Ikom Cocoa Processing Factory in Cross River State has commenced the production of chocolate bars.

According to the Governor of the state, Prof Ben Ayade, the development signifies an economic boost to the state, adding that it was high time Africa reaped the benefits of its cocoa value chain. 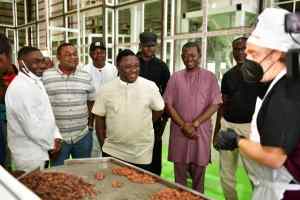 In Ayade’s remarks, Africa accounts for 86 percent of the world’s cocoa production, but unfortunately, in terms of the economy, it gains only six percent.

This, the governor said, meant that the continent produces 86 percent of cocoa, export the cocoa beans, and in turn goes back and import chocolate into Africa.

He said, “This process has come to an end. So what you find here is a full cocoa processing plant from the tree to chocolate for final consumption.

The chocolate from the Ikom Cocoa Processing Factory, Ayade disclosed was special due to its slightly bitter taste, which is more desirable than the sugary, very sweet and fattening chocolate which is unhealthy.

“For our chocolate brand, we try to use the best of the ingredients which contain that slightly bitter taste, which is an antioxidant that is particularly good for the body,” he said.

The governor further stated, “The process we have in place is a requirement to create jobs for the teeming youths.

“If 65 percent of our 4.5 million population are young people under the age of 35, and we cannot create jobs, it means that we are going to have more and more #endsars like protests.”

“So my inspiration was to create jobs and the best way to create jobs is through agro-industrial revolution and that is what this cocoa processing factory stands for,” he added. 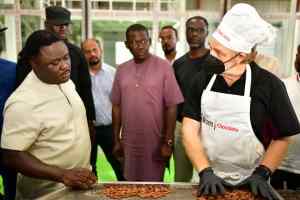 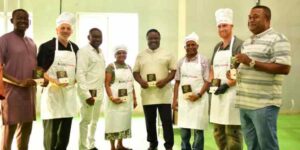